There has been alot of interest in retro computing, especially with people spending alot of time indoors lately! Ive seen many articles and blogs in the past year on new amiga releases, one in particular got me interested in the new amiga boards, specifically the reamiga 1200 boards.

Amigas were a huge part of computing history and still have a large active community, funnily in 2019 linus responded to an amiga commit to the linux kernel with ‘Christ. Will that thing never die?’.

Having completed the BEEB repairs the reamiga looked like a challenging long term project. First steps were to actually get an amiga 1200. I didnt want to break a working machine apart so i tried sourcing individual parts. I would need a case keyboard, mouse and motherboard. Its taken 5 months but ive got really lucky and saved alot of money in the process. Working 1200s go for 4-500 ive seen unknown state or for parts easy go for 250. So far im at 140 and it works (mostly).

Task 1: Donor board and ATX Build

I won a bid on a 1200 board REV 1.D4. The photos seemed to show missing legs on chips but having received the board it was actually in excellent condition. Though listed parts not working and photos appear to show missing legs which might have put others off, the IC/chips actually looked fine. Seeing the corrosion around the video output area of the board i expect this to have no picture so the first task was to see what state the board was in. Todo this i made up a power lead and got diagroms + serial cables.

You can hack an ATX power supply cutting back the wires as a permanent solution. I chose to use a cheap break out board on any atx. I didnt have a 5 pin dim but you can pick them up cheap and easily solder to new cable. In my case i found a cable with amiga wire colours from the table above, new original.

At first it didnt come on but after some board cleaning, a lot of grime removed with cotton buds, i got a successful start! Turns out the board self tests and loads kickstart roms perfectly fine. This means its passing the following self tests :

These colors indicate a problem:

Task 2: Diagrom tests to asses state of components from donor board.

At this point I didnt have a keyboard or mouse yet but i did have console cable for network equipment so i setup an RJ45 to RS232 DB25 connector. You only need TXD RXD and GND. I expected serial with the diagroms to be bi directional but it would appear its just for boards with dead displays so i couldn’t do any tests yet. But this will come in useful later during the build when all i have for output is serial on the board!

Table and setup below.

A1200 keyboards are not cheap! But broken 500 boards come up often, have the same dimensions and are mechanically identical. You can wire a 500 keyboard into a 1200 board but it requires soldering. Knowing this i also picked up a membrane, not a new hard one but used to save on costs.

I also got a cheap ps2 ball mouse and quadrature adapter, you can get new USB mouse converters but they are x3 the cost plus the ball mouse is more authentic!

You can use SmallyMouse2 i believe, i have one for my acorn but i didn’t want to change it for the amiga serial connector documentation at the following link https://www.waitingforfriday.com/?p=827#Commodore_Amiga

The membrane had no continuity, after cleaning the ribbon everything came to life! It will need repairs for the spacebar, keypad keys 6,7,8 and a replacement * key. I suspect the trace has gone for the spacebar. The 6,7,8 might just be a case of needing grime removed much like the ribbon end.

And now some tests. As this is a stock board with 2MB of chip ram, you can ignore the memory errors, instead use the extended tests. I didn’t have to look far to find user with experience :

I have a 1.2 DiagROm I have used on both an A500 and A2000 and it does the same so wouldn’t worry about it. I would advise to run the extended test as it gives you a graphical output of what it is checking and if it finds any errors.

So far so good. I can be very confident that the important components are working before migrating them to a reamiga v1.5 board. Although i only show info and checksum of the 2MB chip ram above, the audio channels worked, the graphics tests worked, i couldnt find any faults other than what i already knew regarding the keyboard membrane issues. 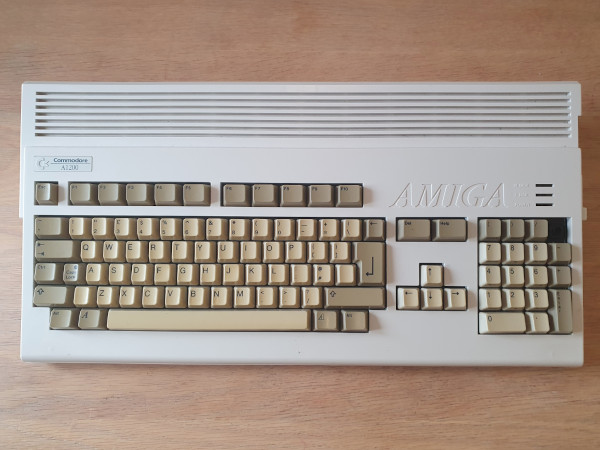 Given i pretty much have a 1200 now im thinking instead of jumping into doing the migration and build ill instead get a compact flash card and ide adapter and setup the card for workbench. There should be no issues booting from the card and let me do a final check on stability and tick off ide working (leaving just the floppy untested).

I think the only risk to this is the age of the capacitors on the donor board so im not planning on keeping it on for long, i can already see how much interference there is in the video signal and i guess this is down to lack of smoothing from the current caps.