Like alot of families in the UK, we had a BBC micro (Beeb) in the house. During the lockdown my mother was clearing out the loft and it turned up for the first time since mid naughties. With lockdown in place i set about getting it back to full working order.

As eager as i was to turn it on i knew the capacitors would be in poor health after 30+ years in storage so i ordered a full replacement set. If i had turned it on the PSU would have blown throwing out black smoke, this would not brick the computer, so if this happened to you just get a new PSU from ebay or replace them yourself if you know how to use a soldering iron or willing to learn.

Full capacitor kits available on ebay here. I would strongly recommended this one, read the full description to see why. Take time to read the description fully when ordering, my unit has a BSR PSU which is clearly labelled and so compatible with this pack.

Having desoldered all the capacitors and soldering new ones in i switched on the computer. First time i got a continuous tone. The first tone when switching on a BBC Micro is just noise from power applied to the circuits the second familier tone is from the operating system initialising. This meant the computer was not starting and it was time to check out the stardot forums to diagnose and repair.

First i tested the new PSU output voltages with a multimeter after the replacement and it was perfect 5v. Visually inspecting the top and bottom of the mainboard shows no obvious damage or corrosion. Having searched stardot forumns it was clear a memory fault was most likely. Also given that it cant start the OS its likely in the lower RAM bank. There are other causes but we can try something simple first before buying replacement parts to troubleshoot without knowing the cause.

The BBC Model A has 1 x 16k ram, the B has 2x 16k RAM. If you remove the jumper on the mainboard labeled S25 (normally north on model B) you can disable the lower bank and use the upper (S25 out). Doing this braught the BEEB to life! but with 16K RAM.

In order to locate the faulty ram chip you have to start the system with both enabled. If the upper had been at fault there would have likely been unusual artifacts on the screen, corruption caused by video using upper memory. The OS loads into lower so we need to swap the banks around for this units repair. To do this you need a SN74LS04N IC LOGIC INVERTER and some jumper wire connectors.

Use of logic invertor

I did not have bread board so just soldered direct to the logic invertor chip. Having prepaired this i, turned it on and the beeb started showing 32K RAM. As you can see with some screen artifacts so the video memory is using the upper 16kb ram bank and showing corruption. It has since been pointed out the mmfc is lower case another indicator of the fault, the 6th bit represents 40 on the ascii table so 155 M » 115 m! What we need to do now is write to the Upper (actually lower) ram and see what we get back. 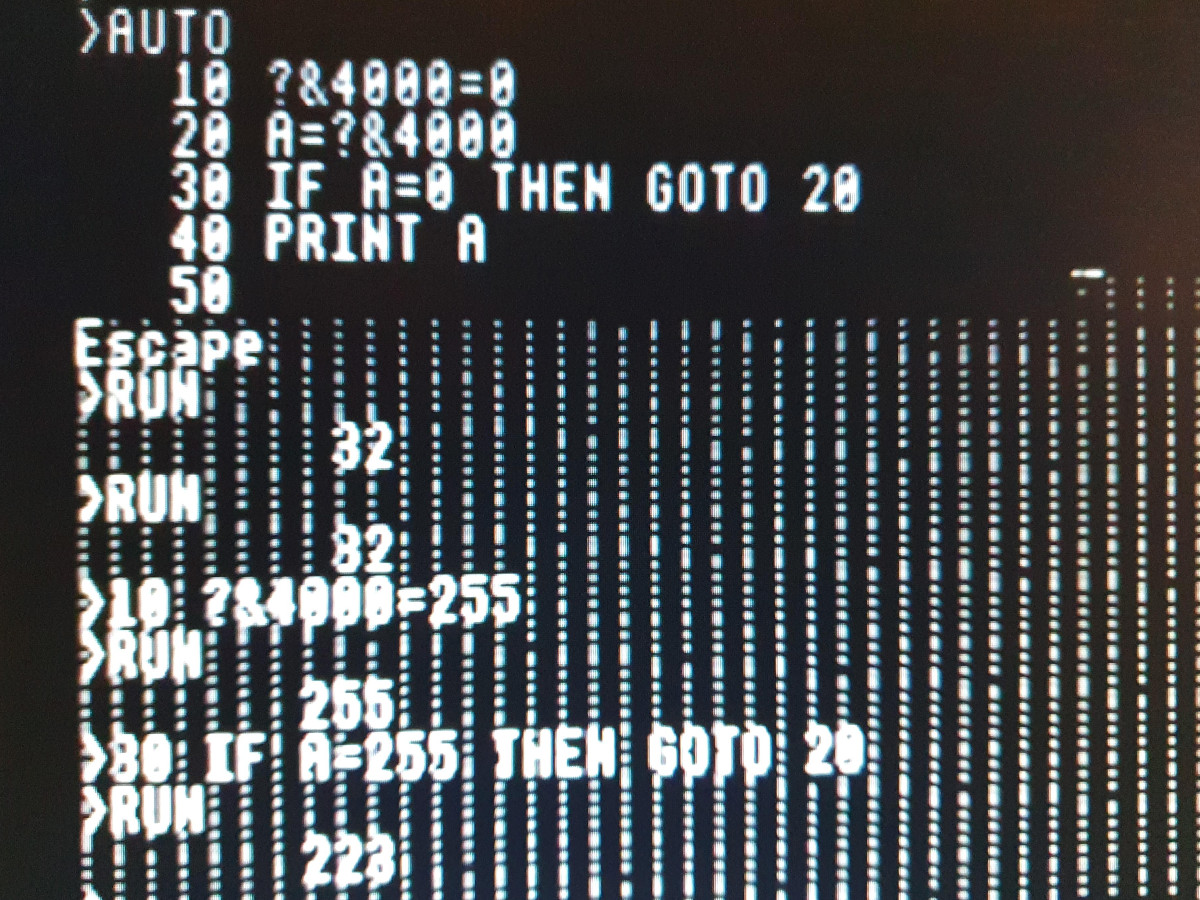 Looking at the binary representation of these numbers indicates the 6th bit is at fault. As a word is written over 8 chips (its an 8 bit computer!) we need to swap out the chip responsible for the 6th bit. Looking at the diagrams this is IC66.

Before replacing the component, i tried cleaning the area around IC66 with white vinager and a cotton bud (i didnt have isopropyl alcohol and didnt really want to store any). This did not help, i also tried reflowing the solder on the legs for IC66. As there was no change i went ahead and sourced a replacement part.

I have since been asked why i used vinager an acid, i had this for a battery leak on another system (A3010) as cleaning with it nutralises the alkali of the battery. I was also under the impression the vinager evaporated completely but i should have used demineralised water after to clean up. It is better to clean with isopropyl alcohol, i have two young kids you have to be careful its flammable and can be absorbed through the skin.

Before removing the component i piggy backed the new chip on IC66 to confirm it was at fault, this should confirm the fix and did. Unbelievably a fully working BEEB!

Desoldering of integrated circuits is best done with hot air, as i have not got one yet (but i need one for 2 projects im planning both retro) i used solder wick to remove the chip. This was risky but successful after much patience. I really should have used a hot air gun for this part.

As this is a vintage computer now, i used weller lead 60/40 solder to install the new component with a DIP16 socket. 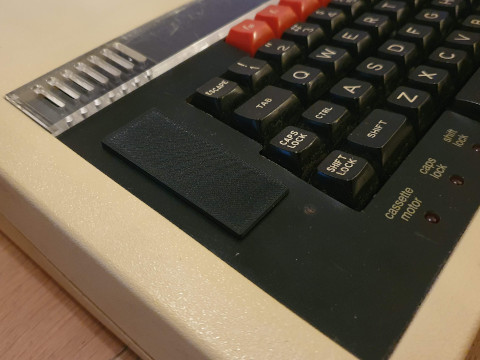 Ash tray cover Lets face it they all got pushed through by kids.

Solid state drive for BBC Although not true to the system this modern upgrade comprised of a ROM and userport installed SD Card allows instant loading of any of 500 games contained on 1 SD card. 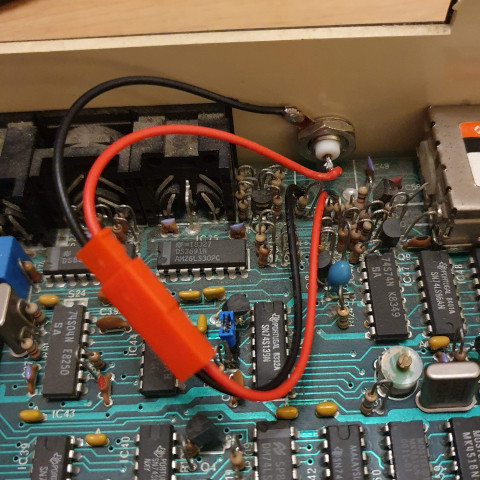 JST Connector This was used so i did not have to desolder the RF wires to remove the mainboard in future. Though i still have to unscrew it to get the board out.

Overall pretty satisfying bringing this BEEB back to life. Taking a look at BBC BASIC and finding many games are suprisingly playable even today.

Its incredible looking back through the library of 8 bit games for the beeb. Some of the games must have been a real labour of love given they are credited to one author. The classics i remember were chuckie egg, rocket raid and super invaders. There are many text adventures, such as countdown to doom, still popular at the time and some breaking ground games that were very inflencial even today, i am of course referring to Elite.

I might get some sideways RAM or a tube (co-processor) in future. Also might try to setup the SD card with some software other than games, possibly educational for my kids. In the mean time we are occasionally switching it on and trying to set new Super Invader high scores between the family.

bbcmicro.co.uk - All the games that are on the SD card but can be played in your web browser.

flaxcottage.com - Alot of software for the beeb hosted here in all areas of use not just games. Lots of educational material.

Replace PSU capacitors that fail with:

The ‘ashtray’ is actually meant to be place for a ZIF socket:

Cheap BBC Micro Upgrades you can install yourself: